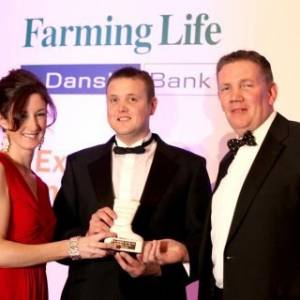 Excellence in the agri-food sector was recognised at the second Farming Life and Danske Bank awards on Thursday 1st November. Moy Park was strongly represented amongst the winners including the Lifetime Achievement Award, which was won by Eric Reid. McLarnon Feeds was awarded Farm Supplier of the Year and Moy Park grower John Richardson was named Poultry Farmer of the Year. The awards ceremony brought focus to the excellent standards within our industry and demonstrated Moy Park's position as the leading poultry business at the heart of the farming community. Lifetime Achievement Award - Eric Reid The key award of the night, the Lifetime Achievement Award, was presented to Eric Reid, who has been actively involved in the poultry industry in a career spanning 45 years. He has risen to the top of his profession and has had an influential role in developing both Moy Park and the supply chain - as well as representing the industry's interests internationally. Farm supplier of the year - McLarnon Feeds The McLarnon Feeds team impressed the judges with the development of the McLarnon Nutri-Balance system and their focus on new technologies and innovative products, which have been trialled on farms to establish cost effective animal/bird performance. McLarnon Feeds stood out from the competition with their strong focus on helping farmers maximise animal efficiency and farm profitability, by not only supplying superior feed ingredients but also on-farm technical advice. Poultry Farmer of the Year - John Richardson Moy Park broiler growers took home the winner's award and the highly commended accolade in the Poultry Farmer of the Year category. John Richardson owns and manages an organic free range farm at Eglish, Dungannon. He built the first of his 3 sheds on the family farm shortly after leaving agricultural college. John is a particularity conscientious farmer who continually questions management standards with a view to improving bird welfare and performance. Stephen and Sharon French were highly commended in the Poultry Farmer of the Year category. They invested in two sheds three years ago just outside Randalstown and are keen to expand further. Their sheds, built with bird welfare high on the agenda, have been recognised for efficient gas usage and feature under floor heating, giving a dry warm environment for the birds.