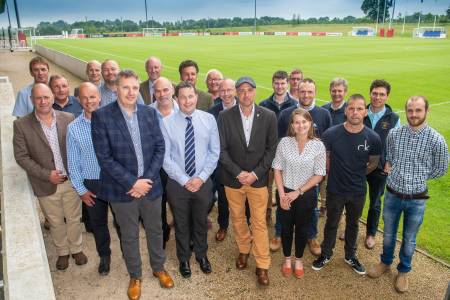 On Friday, June 8, 25 new members from Derbyshire were honoured. The Ross 400 Club celebrates the achievements of Ross broiler farmers who have reached a European Production Efficiency Factor (EPEF) of 400 or more.

The award ceremony was held at St. George’s Park, the home of the English Football Association’s national training center.

“St. George’s Park was the perfect match for a 400 Club meeting and awards lunch with Moy Park growers,” says Stuart Thomson, Aviagen head of UK Sales and Technical. “Our members are driven by trying to reach the winning score of 400 or more and we are delighted to see so many top performers today -- the UK 400 Club unites them all as a world-class team.”

Stuart Thomson made a presentation on the history and impressive growth of the 400 Club, as well as discussing its latest initiatives and the Club’s progressive plans for the future. “Among our Moy Park guests, we had 16 entrants who achieved a 400+ rating for the first time,” says Stuart. “A member of the Ross 400 Club Steering Group, Neil Brown, was among the award-winners. The highest EPEF attained was an impressive 431, with several winners achieving more than one 400+ EPEFs during 2017. This is an unprecedented score and a truly amazing feat!”

Moy Park guests of honour included Steve Urwin, general manager, Broilers GB; Ross Armstrong, broiler manager, Moy Park; as well as Ian Chapman, head of sales and operations planning (agriculture). “We were delighted to be part of this memorable event,” says Ross Armstrong. “It’s a pleasure to lead and have such a successful group of Moy Park broiler farmers within our supply chain, and to have so many making the prestigious 400 club fills us with great pride.”

20 growers were presented with their 400 Club awards on June 19 at a special ceremony in Ewerby, Lincolnshire. Most of them achieved the accolade for the first time; two of the winners got a special mention as they attained seven 400 plus results in a year, one of them with subsequent flocks.