Moy Park sweeps the board at top awards ceremony 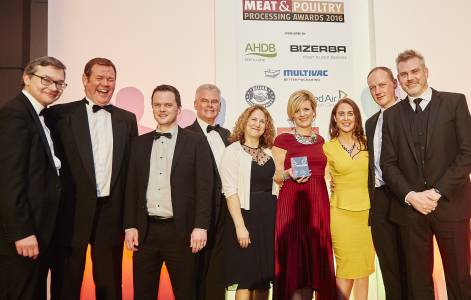 Moy Park has won a total of five awards at this year’s prestigious Meat & Poultry Processing Awards, including a hat-trick of victories in the top three categories - Overall Processing Business of the Year, Retail Processor of the Year and Product Developer of the Year.

The Meat & Poultry Processing Awards recognise and reward expertise, skill, innovation and entrepreneurship in the UK’s processing sector. As well as securing the top award in three of the most hotly contested categories, Moy Park was also awarded highly commended for Environmental Initiative of the Year and the company’s Brand Product Development Manager, Mairead McCrory, was highly commended in the Young Processor of the Year category.

Praising Moy Park for its victory, Rod Addy, Editor, Meat Trades Journal said; “Moy Park was an extremely worthy winner of the Overall Processor of the Year trophy as well as the Product Developer of the Year and Retail Processor of the Year awards. Its commitment to investment in people, formidable new product development programme and well-researched and innovative ideas, all earned it special mention from the judging panel. As well as praising the company’s thoughtful, intelligent and objective plans for investment in people and training, the judges felt its commitment to green goals should also be a major source of pride.”

2015 was a successful year for the company having launched a range of new products including the first roast-in-the-bag chicken product to use cutting edge thermoformed packaging technology. The firm also continued to make investments in its people and facilities, including investment in its ‘ready to eat’ and ‘fresh poultry’ categories as well as launching an extensive skills growth programme.

“Moy Park is a values-led company committed to delivering the highest standards for our customers - from product innovation to industry leading agriculture and operations - so it’s very rewarding to be recognised in this way.”