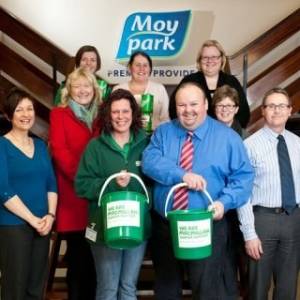 On Friday 7th September, the Moy Park Executive Team, including Nigel Dunlop (MD / CEO), Janet McCollum (Group Finance & IT Director), Alan Gibson (Agri & Fresh Poultry Director), Mike Mullan (HR & Business Improvement Director), Keith Irvine (Supply Chain Director) and Richard Macdonald (Non-Executive Director) began an intense challenge to scale 4 mountains in 3 days to raise money for Macmillan Cancer Support, Moy Parks nominated charity. The challenge began at Carrauntoohil, Country Kerry, Ireland's highest peak standing at 1,038 metres / 3,406ft. After a massive 5½ hour climb the group reached the peak which is topped by a large metal cross. Following a short rest to enjoy the bright day, they descended Carrauntoohil and hit the road for Galway. On Saturday, after a short drive to County Mayo, the team tackled Mweelrea (814 metres / 2,670 feet), the highest point in Connacht and amongst the highest mountains in Ireland. Following another epic climb, the group reached the pinnacle of a very wet, windy and misty Mweelrea. After this, the weary crew took to the long road to spend the night in Newcastle, Co. Down, arriving late into the night. 2 mountains down, 2 more to go! At 6am on the Sunday morning, our mountaineers began to climb Slieve Donard and once again did an amazing job at scaling Northern Ireland's highest mountain (850 m / 2,789 ft). By around 10am, the team was on the move again for the final time, heading for Lugnaquilla, Co. Wicklow. At 925-metre / 3,035 ft high, 'Lug' is the highest peak in the province of Leinster, and one of the highest peaks in Ireland. It was here the successful team finally conquered the 4 Peaks Challenge!! The team returned to Moy Park today (Tuesday, 11th September) and Nigel Dunlop said of the experience "It was a fantastic challenge and a great chance to get the team together in a totally different environment and all for a great cause - Macmillan Cancer Support. We have been overwhelmed by the generosity of people and are delighted that we are on course to raise close to £20,000 for Macmillan Cancer Support.