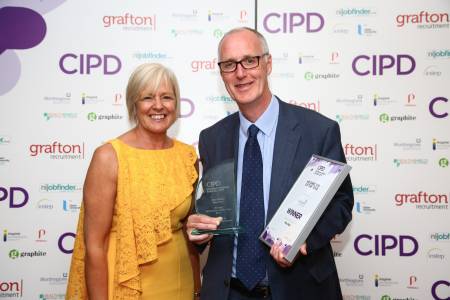 Mike Mullan, an Executive Director at Moy Park, has been named ‘HR Director of the Year’ at the esteemed CIPD Northern Ireland Awards 2017.

Walking away with the evening’s top accolade, Mike was commended by the judges for his role in ‘achieving significant organisational transformation’ at the top 10 food company. The judges also noted that his HR leadership has had an enormous impact on commercial outcomes and a substantial influence on the development of people at the firm and the wider community in which the business operates.

Speaking about the award, Mike, who is responsible for Moy Park’s HR and organisation development across Europe, said;

“The CIPD is focused on people development and driving outstanding HR practices so it is an honour to be recognised by the industry in this way. Moy Park’s success is built on the talent of its people and it’s a privilege to help harness and nurture this talent as part of Moy Park’s executive team by championing industry leading organisational and HR development.”

As well as playing a pivotal role in Moy Park’s Executive Leadership Team, Mike works with a number of government and industry bodies geared to supporting people’s personal development and growth potential including the CBI NI, the UK National Skills Academy for Food & Drink, and the NI Food and Drink Sector Skills Council.