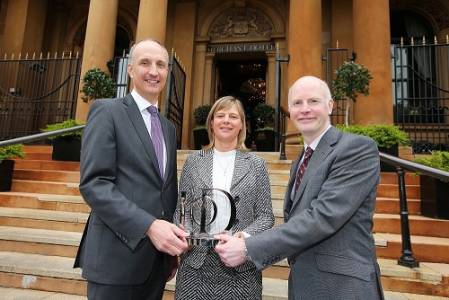 Janet McCollum, Chief Executive, has been recognised for leadership excellence at the prestigious IoD NI First Trust Bank Director of the Year Awards.

The only director from the food industry to receive an accolade, Janet was presented with the ‘Large Company Director of the Year’ Award in acknowledgment of her proactive approach towards business growth, corporate governance and responsible leadership. Along with ten other local category winners, she will represent Northern Ireland at the IoD UK ‘Overall Director of the Year’ Awards later this year.

“I am honoured to receive this award from the IoD NI; an organisation that is committed to helping businesses harness and nurture leadership talent. It is a great privilege to lead Moy Park, now a top 10 UK food company. Moy Park’s success is driven by the great people at all levels within the business. Thanks to their continued dedication, support and hard work, Moy Park is the successful and innovative business it is today.”