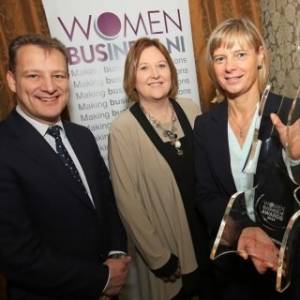 NORTHERN IRELAND’S TOP BUSINESS WOMEN RECOGNISED BY WOMEN IN BUSINESS NI The crème of Northern Ireland business women were last night recognised at the fourth annual Women in Business Northern Ireland Awards in association with Invest Northern Ireland. Women who have created thousands of jobs in the last year, increased their company turnovers, those who own and manage businesses punching above their weight across the globe and leaders some of this country’s top 100 companies descended on the Culloden Estate and Spa to celebrate their achievements. Roseann Kelly, Chief Executive of Women in Business NI said: “As I looked around the room and considered the wealth of knowledge and experience in the audience at our awards, I felt an enormous sense of pride in the women who are making a phenomenal impact on our economy here in Northern Ireland and who are doing business on behalf of NI around the world. Women who have overcome the challenges and issues associated with starting a business and who have broken down barriers to trade, development and growth with the support of Women in Business NI. “This year we received 150 applications for the awards and the judges were overwhelmed by the sheer scale of achievement from some well known and some relatively unknown business women operating their businesses here.