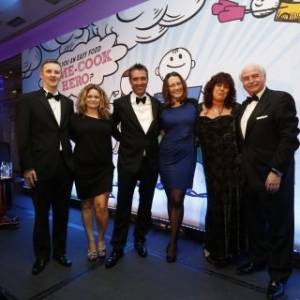 Ireland's top chefs have some tough new competitors after ten amateur cooks picked up awards at the Easy Food Home-Cook Hero awards in Dublin on 2nd November. The Easy Food Home-Cook Hero Awards is a national cookery competition, which is open to all home-cooks and aspiring chefs, and Moy Park was proud to sponsor the Fabulous Fowl category for the second year running; entrants were asked to develop the ultimate chicken recipe, which captures the delicious tenderness and flavours that make this fowl so fabulous. 30 finalists, from as young as five years of age, gathered in Cooks Academy on South William Street on 2nd November to prepare the recipes they entered in the competition for esteemed judges Kevin Dundon, Catherine Fulvio, Catherine Leydon as well as Gina Miltiadou of Easy Food magazine and Vanessa Greenwood of Cooks Academy. After much deliberation, the judges eventually decided on one winner in each of the ten competition categories. The winners were officially announced at a gala black-tie event at the Shelbourne Hotel in Dublin that evening, with each successful entrant receiving €1,500 worth of prizes and the honour of having their recipes published in the upcoming Easy Food Home-Cook Hero Awards Cookbook. We'd like to thank everyone for entering our Fabulous Fowl category and congratulations go to runner up Charlene Whoriskey with her 'Marvellously Moreish Baked Chicken Dippers with a twist' and second runner up Geraldine Henchion with her 'Fat Free Barbeque Chicken'. But it was Radka Zacharova whose 'Plum Chicken Licken', was the winning dish in the category. Radka said: "I have tried a few different types of chicken before and must admit that Moy Park chicken is the best tasting of all. I would like to thank Moy Park for bringing such a tasty, good quality product into my kitchen."