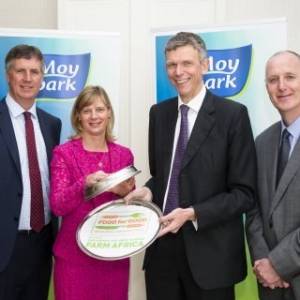 Leading UK food company Moy Park has announced a charity partnership with Farm Africa which will see the company aim to raise an ambitious £100,000 for the charity over the next three years.

As part of its partnership with the charity, Moy Park has also become a Platinum Sponsor of Farm Africa’s ‘Food for Good’ campaign. ‘Food for Good’ is committed to tackling the global challenge of hunger and supporting farmers in eastern Africa so they can increase harvests, become self-sufficient, start businesses and feed their families for the long term.

Over the next three years, Moy Park employees will take part in a variety of fundraising activities including a trek through some of Ethiopia’s most challenging countryside, mountain climbing, competing in marathons and cycle relays.

A member of the Moy Park team will also be travelling to the Nou Forest in Tanzania to take part in the Big Beehive Build along with other women from the UK food industry. Here, challengers will work alongside the local Erri community to construct 90 hives in just three days so that the beekeeping group can learn how to make a business from honey production and get a better price at market by improving production and quality of honey. Staff at Moy Park’s sites will also host a variety of fundraising activities including a welly-wanging competition and African-themed coffee mornings.

Mike Mullan, Moy Park HR Director Europe said: “We are delighted to announce our partnership with Farm Africa. The charity’s commitment to tackling hunger with projects that empower farmers and equip them with the tools to start businesses and become self-sufficient, is an incredibly worthy cause.”

Nigel Harris, Farm Africa CEO said: “We’re delighted that Moy Park has confirmed their long-term partnership to support Farm Africa and the Food for Good campaign. Over the past years, the food and hospitality industry has raised an impressive £1 million for Farm Africa and Moy Park has played a significant role in helping reach this total. Moy Park’s aim to raise £100,000 for Farm Africa is a fantastic start to the new Food for Good target of raising £5 million that will help to take 70,000 African smallholder farmers and their families out of hunger and poverty, for good.”