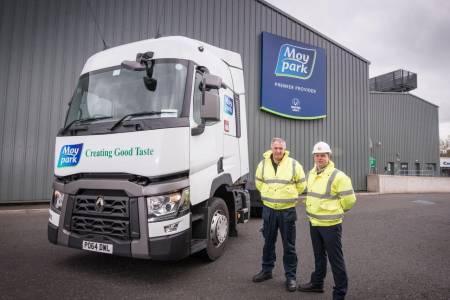 Trials were carried out on double stacking pallets to increase transport efficiency, from February to April 2011. It was important that the increased load was managed safely and maintained product packaging quality. This has resulted in more products being carried on each vehicle whilst maintaining product quality and safety. On the trials done to date with one customer a 10% reduction in vehicle movements has been made possible removing three vehicle movements per week since July 2011. This has resulted in fewer road miles and nearly 8,000 gallons of diesel saved per year.

Moy Park has teamed up with other companies in the locale who are delivering to the same customers to optimise its road transport, utilising the load and minimising the fuel used. Not all our trailers are 100% full, and companies with smaller delivery loads would find it uneconomic to run a lorry which is not even half full. By working together we can optimise the trailer fill, by cross docking at Craigavon and consolidating a Moy Park load with pallets from a partner. The benefits for road miles are greater on longer journeys from Northern Ireland to customer depots in England. This has resulted in at least two fewer vehicle movements and saving over 5,000 gallons of diesel per year.

We have made significant progress in reducing car emissions by over 16%, as measured by CO2 g/km for cars ending their contract in 2011, compared to those that will terminate in 2013 and beyond. By understanding the increased efficiency and performance of modern cars drivers have significantly changed to leaner and smaller engines.